Javascript is disabled on this browser.
Javascript must be enabled for this website to display and function correctly.
Home  »  Hazard  »  UK Seismic Hazard

Seismic Hazard in the UK

Although historical observations dating back several centuries show that damaging earthquakes are relatively rare in the UK, they do occur so it is important to quantify the hazard they pose to the built environment. BGS seismologists have recently completed a new seismic hazard assessment for the UK. This has been undertaken with support from the Institution of Civil Engineers (ICE), other seismologists and engineers based in the UK and with oversight from the British Standard Institution (BSI) sub-committee B/525/8 for Eurocode 8 (EC8): Earthquake resistant design of structures. The context is a complete revision of EC8, now nearing completion.

The seismic hazard is computed using a model that aims to characterise the relevant earthquake processes and effects in a region. It consists of two parts: one that characterises earthquake occurrence in space and time (where they occur and their frequency of occurrence, sometimes referred to as the seismic source characterisation model) and another that describes the ground shaking that may result from potential future earthquakes (the ground motion characterisation component). The model is based on historical and instrumental observations of earthquakes and their effects, and information and data relating to the tectonics and geological structure of the UK region. The modelling must also try to capture the uncertainty relating to both the natural randomness of the earthquake process and to limited data and knowledge about different aspects of earthquakes and their effects.

The new seismic hazard maps are given for three ground motion measures: peak ground acceleration (PGA) and spectral acceleration (SA) at 0.2 s (5 Hz) and 1.0 s (1.0 Hz) (assuming 5% damping). They show these results for rock conditions (time-averaged shear wave velocity for the top 30 m, Vs30, of 800 m/s) and have been computed for four return periods: 95, 475, 1100 and 2475 years. These return periods correspond to probabilities of approximately 41%, 10%, 5% and 2%, respectively, of exceeding a particular level of ground motion in a 50-year period (the typical service life of a building). For example, for a return period of 475 years, the maps show that the PGA hazard for much of the UK is about 0.04g. In any one year, this means that there is a 0.002% probability of a PGA higher than 0.04g happening (this is the reciprocal of the return period). This can also be described as there being a 10% chance of a particular location experiencing a PGA higher than 0.04g in any 50 year time period.

The maps confirm that seismic hazard is generally low in the UK but that the hazard is slightly higher in areas like Wales and north central England. This largely reflects the higher rates of historical earthquake activity in these regions.

The technical report describing the development of the maps, and the data files containing the main elements of the model and key datasets are below.

Please note that these hazard maps are not a substitute for a site-specific hazard assessment should one be required. The user must take responsibility for checking that use of the results contained in this report is appropriate for the case in question. 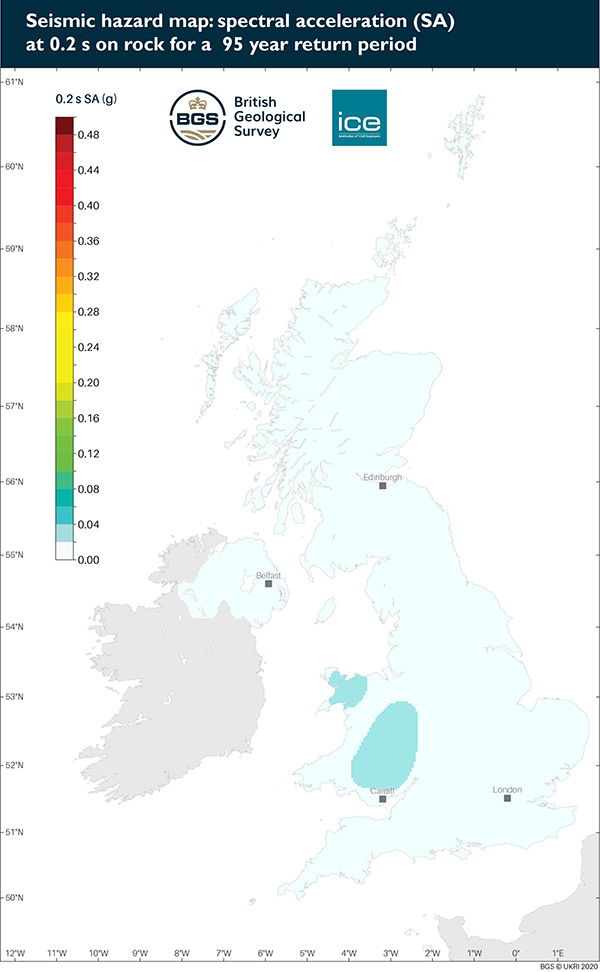